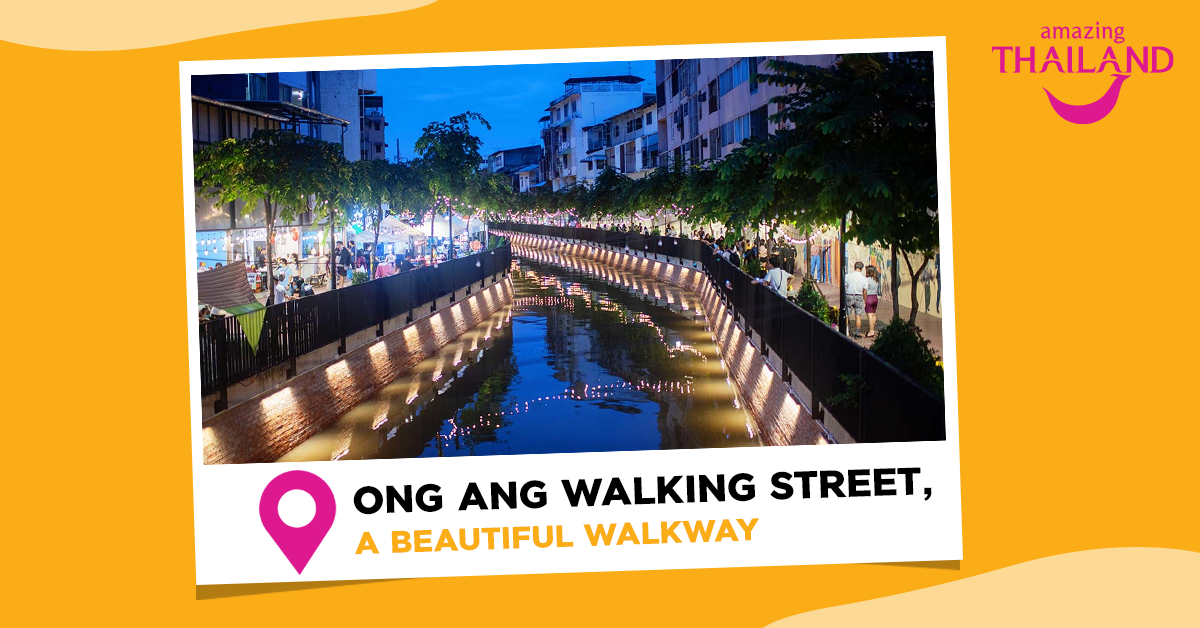 Visiting Bangkok? Have you heard about its latest attraction, Ong Ang Walking Street? This must-visit spot is much more than a simple pedestrian street.

Let’s find out about its history, main highlights, and how to get there!

Ong Ang Canal or Khlong Ong Ang was dug in the reign of King Rama I after Bangkok was established as the new Thai capital.

Back in the very past, Khlong Ong Ang was just like other canals, where children came to play in the water. There were also food stalls lining up on both sides during nighttime.

Not long after, much of the canal was transformed into markets selling second-hand photographic equipment, video games, and toys. It was then known as the biggest toy center in Bangkok.

During this period, people could hardly see the canal as it was covered with plenty of metal sheets, bringing about the name “Talat Saphan Lek” or “Iron Bridge Market.”

In 2015, a beautification project was initiated, resulting in the clearance of many shops built over the canal. The aims were to enhance the canal’s existing charm and convert it into a new landmark of Bangkok city.

Due to the renovation, Khlong Ong Ang is now filled with clear water. Both sides of the canal are walkways decorated with trees and modern lightings. The area is again being frequented by both locals and tourists.

It has also won the 2020 Asian Townscape Award for Landscape Improvement Project From UN-Habitat Fukuoka.

Apart from being a perfect place for an evening stroll and photoshoot, Ong Ang Walking Street also has a wide variety of attractions for you to explore.

The most famous activity that you must not miss here is kayaking on the Ong Ang canal. There are kayak rentals in which life vests will be provided.

There are many buskers along the walkway performing live music. While some are solo vocalists and sax players, there are also full bands playing traditional or modern instruments. You may find other kinds of entertainment such as magic shows too.

There are many beautiful cultural murals on the walls of Ong Ang Walking Street, where you can learn more about the locals’ lifestyle from past to present. Most of the artworks depict the diversity of the communities living here, such as local Thai, Chinese and Indian. There are also pop art murals by famous Thai street artists.

There is a great mixture of food stalls along Ong Ang Walking Street for you to choose from. Some examples include Indian snacks, Masala chai, Taiwanese fried chicken, scallion pancake, Bhutanese momo dumplings, deep-fried bao, grilled squid eggs, Tteokbokki, and many more!

How to get there

Getting here is easy and convenient. You can take the MRT to Sam Yot station. Ong Ang Walking Street is just 50 meters away.

Although Klong Ong Ang was once a little dirty, the new version will definitely impress you given its relaxing atmosphere and a large selection of activities. So, don’t miss this must-visit Ong Ang Walking Street during your next trip to Bangkok!