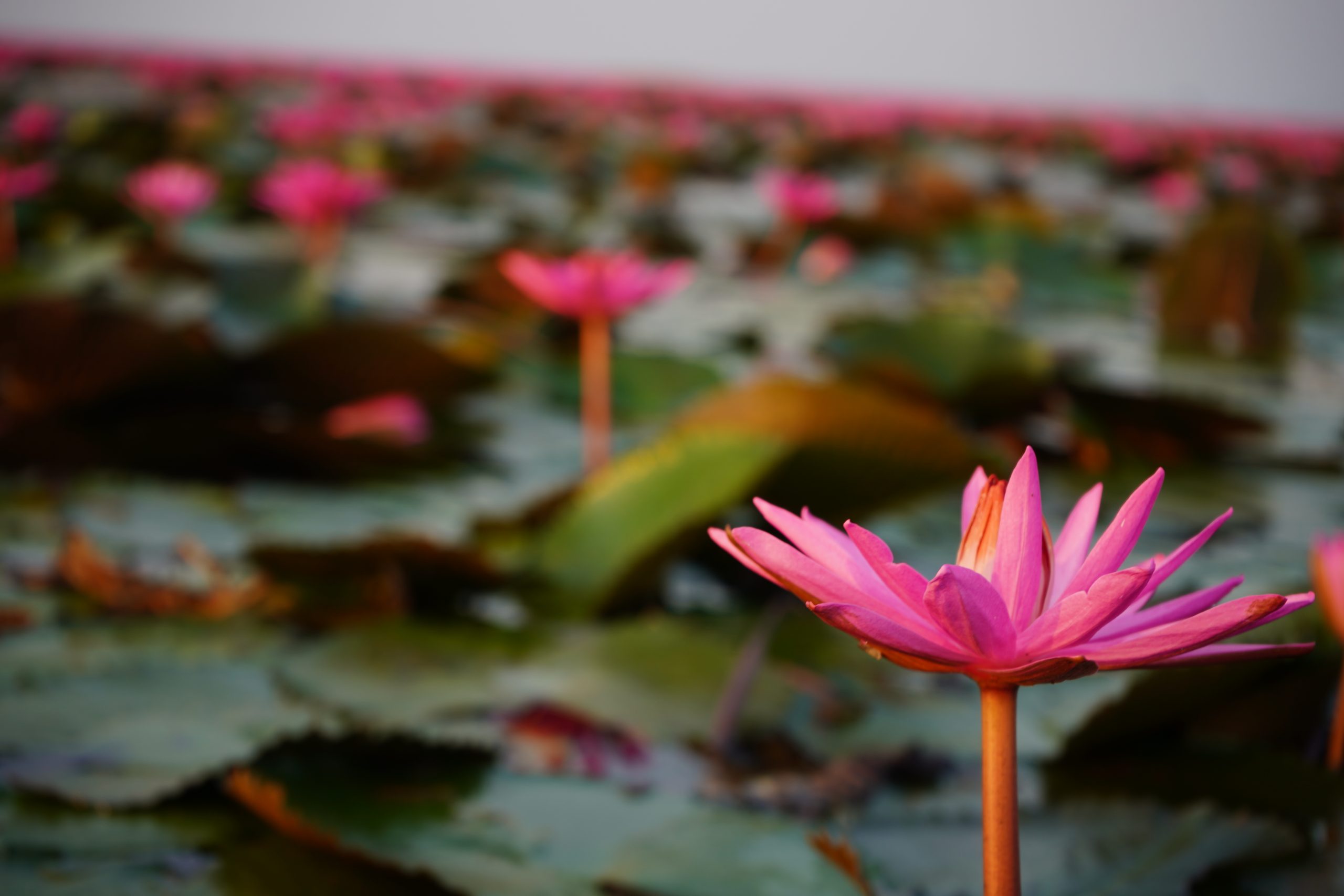 Udon Thani is a large province that serves as a center of transportation, trade, and tourism in the Northeast of Thailand. The province is a land of forest temples and a gateway to Laos. Udon Thani also possesses an Archaeological Site that is evidence of one of the world’s most ancient bronze-age civilizations. It is a province blessed with natural tourist attractions and is well known for its Khit-style textiles.

1. Red Lotus lake, Kumphawapi (40 km from Udon Center)
Best to to go: From November to Febuary from 6.00- 10.30
How to get there: You can rent a vehicle and drive, hire a taxi or visit the lake as part of a tour. If you are staying overnight in Udon Thani, your hotel should be able to make arrangements for you or put you in touch with somebody who can help.

Information on tours of the Red Lotus Lake is available from the Tourism Authority of Thailand (TAT) office opposite Nong Prajuk Park. There is also a tourist information kiosk at UD Town, the mall close to the railway station.

About three kilometers north of Ban Chiang is Wat Santiwanaram (วัดสันติวนาราม). It is in Nong Han District of Udon Thani Province. Of note is the chapel on the lake that is shaped like a giant lotus flower. Inside there are some beautiful murals on the walls which show the story of the Lord Buddha. There is also a large white Buddha inside. The chapel has a diameter of 19 meters and also a height of 19 meters. It consists of 24 lotus petals. Protecting the approach to the chapel are two Naga serpents.

This temple circumscribes nearly 400 acres of lush forest, and as a result, is a tranquil locale for Buddhist meditation practice. Located next to the temple is a stupa (also known as a pagoda) named Prathom Rattana Mahaburaphachan Chedi, where holy Buddhist relics are believed to be enshrined. The stupa was built in the Lanka style, is 25 meters high and is decorated with golden mosaics.

How to get there:  From Udon Thani, take highway 2 northbound towards Nong Khai, then turn left on to route 2021 before you reach Na Kha village. Stay on this road turning right at the junction in Ban Phue on to route 2348. As you head west you will eventually, several kilometers further on, see the temple signposts, simply follow them as there is no alternative route. The journey can take up to two hours from Udon Thani depending on road and traffic conditions.

The beautiful scenery and photo taking are the activity available here. It takes 4 kilometers from Ta Phraya National Park Head Quarter heading to Non Din Daeng District, to reach the border checkpoint. Turn right and go straight about one kilometer.

The Nong Prachak is located in Mak Khaeng, in the Udon Thani province.This giant pond has existed before the establishment of Udon Thani town. It was formerly called “Nong Na Klue” (pond of salty water) and later changed to “Nong Prachak” in honor of Major General HRH Prince Prachaksinlapakhom, the founder of Udon Thani town.
Location: https://goo.gl/maps/QzUqh2QD6d35iX1g8

Udon Thani Municipality, a city full of cultural attractions that is truly fascinating whether it be people’s way of life, unique food, a beautiful city, engaging history, or the latest attraction which is a learning centre about a history of Udon Thani named ‘Udon Thani museum‘ It was also reformed its information presentation to be exceptional and modern along with reforming a landscape around the area to create a beautiful scenery. Moreover, a new building was constructed to be a service centre of the museum. It was inspired by a pattern of Udon Thani’s Mhee-Khit fabric. The pattern was engraved on a roof of the building. The museum building is not only a stunning and outstanding architecture, but also an archaeological site in a custody of the Fine Arts Department. The Rachinuthit building has also been received the 1993 ASA Architectural Conversation Award which is Her Royal Highness Princess Maha Chakri Sirindhorn royal cup.It is the only archaeological site in Thailand that wooden bricks were found as the building’s construction material.
Location: https://goo.gl/maps/vMubxD6LTkTUrBrY

Ban Chiang is considered one of the most significant archaeological sites in Southeast Asia and was registered as a World Heritage Site in 1992. Excavations at a large, oval mound at the site uncovered pre-historic artifacts, especially pottery and bronze implements. Since the discovery of the site in 1966, the dating of Ban Chiang artifacts has been adjusted and refined over time in line with advances in the understanding and techniques of radiometric dating. This research has revealed that the site dates to as early as 3,500 years ago and that the site was continuously occupied for at least 2,000 years. The discoveries at the site, from both Neolithic and Bronze Age civilizations, have shown it has long been a habitation and burial site.
Location:https://goo.gl/maps/WACURpYw3NQQtj1t7

Situated in Ban Phue District, this archeological site features a large number of ancient ruins and objects dating from prehistory. They are mostly from the Dvaravati, Lop Buri, and Lan Xang periods. The site is located in a lush forest called Pa Khua Nam. Within are many rocks of peculiar shapes, the result of a slow-moving glacier millions of years ago. Many of the ruins and objects found in the area were made from the materials found locally, and were not built entirely by hand – for instance, a rock decorated as a stupa, or chiseled into the shape of a foot. Pre-historic cave paintings, sandstone images and idols, and more are interesting sights to behold. The site was declared a Historical Park by the Fine Arts Department in 1991.
Location: https://goo.gl/maps/3WKJN24Bsmu2BLZU7