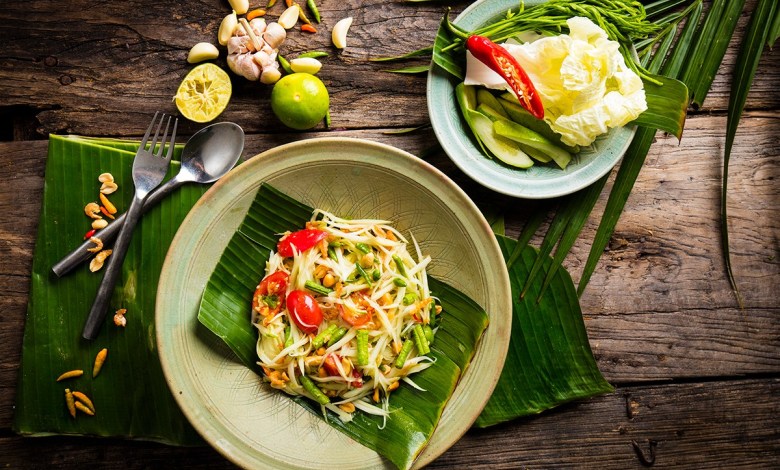 Thai food is known for its scintillating flavours, astounding variety and aesthetic appeal. Here are some ‘must-eat’ dishes from different regions of the kingdom.

Continuing a dining tradition of old Chiang Mai and the Lanna Kingdom, a khan toke dinner features a small round table upon which is served a variety of dishes in individual bowls. People sit on mats or cushions around the table and choose from the dishes as they like. The dishes typically include such delights as sticky rice, chicken or pork curry, fried chicken, vegetables, soup, fried pork skin and chilli dips. During the dinner, there are traditional dance, music and sword performances to entertain diners.

A delicious dish that’s iconic of Chiang Mai, khao soi is a creamy yellow curry soup with egg noodles and slow-cooked chicken (sometimes beef) that’s tender enough to slide right off the bone. It’s topped off with crunchy fried noodles for a lovely contrast to the egg noodles. The tasty soup is typically made with coconut milk, and sides like lime, shallots and pickled vegetables offer even more scintillating flavours.

Lap is a spicy salad dish from the Northeast and neighbouring Lao PDR., but it’s not a vegetable salad … it’s a meat salad. Often eaten with sticky rice, two of the most popular variations are lap kai (chicken) and lap mu (pork), in which the meat is minced and tossed with fish sauce, lime juice, chilli flakes, mint, basil and red onions, as well as toasted rice for a touch of crunchiness. Lap wun sen is another variation that uses glass noodles or vermicelli.

Literally translating to ‘sausage from the Northeast’, sai krok Isan is a garlicky fermented sausage made of pork and rice. The rice helps the fermentation process that gives the sausage its signature tanginess. Sai krok Isan can be eaten on its own or with sticky rice, and also fresh cabbage leaves and ginger to counteract the garlic element.

Nam tok in Thai means waterfall, and nam tok nuea is a juicy, tangy beef salad typically eaten with sticky rice and so named for the juices dripping from the meat, as it is grilled. Shallots, onions, lime juice, mint leaves and ground roasted rice are added to the beef which is sliced into bite-size pieces.

Usually eaten with rice, massaman is a rich, relatively mild curry in which spices not frequently used in Thai curries; such as, cinnamon, nutmeg, mace, cardamom, cloves, cumin, bay leaves and star anise are combined with local produce like dried chilli peppers, cilantro seeds, lemongrass, galangal, white pepper, shallots and garlic. Due to its Muslim roots, massaman is most commonly made with chicken, although there are beef, mutton and duck variations. Potatoes and onions are added in, as well as coconut milk and peanuts.

Kaeng khiao wan is a green curry dish also eaten with rice. Coconut milk and fresh green chillies give this curry its creamy green colour, and it tends to be more pungent than the milder red curries. Along with fish, fish balls or meat, other ingredients include fish sauce, Thai eggplant, pea aubergine and vegetables.

Kaeng som or Thai sour curry is a spicy fish curry or soup with vegetables, one that is made without coconut milk and which gets its characteristic sour taste from the tamarind used in its preparation. The favoured vegetable ingredients include cauliflower, white radish, cabbage, carrot, long beans, Chinese cabbage and asparagus. A popular alternative to fish for this dish that’s eaten with rice too, are shrimps.

With their unique spongey texture, Thai fish cakes or thot man pla hold sauces and other liquids well and so when they’re bitten into, all those flavours are released. The fish cakes’ own distinctive taste comes from the red curry paste, kaffir lime leaves, shrimp paste and chilli ingredients used to make them.

While to some it is an acquired taste, in the South of Thailand phat sato is a popular snack. Also known as stink beans due to their powerful aroma, these nutrition-packed beans are commonly stir-fried in a curry paste blended from other robust ingredients like garlic and chillies, and accompanied by pork or shrimps.

Pla thot kamin or turmeric fried fish is another popular Southern Thai dish. The fish most commonly used is pla daeng, a type of threadfin bream, and this is cooked to slightly crispy. The use of garlic and turmeric – known for its many medicinal and health properties – enhances the dish’s flavours.

Thai massaman has been ranked among the world’s best food dishes by CNN, and a delicious variation from Eastern Thailand is Thai massaman durian curry with chicken. It’s a delightful fusion of the great flavours of the massaman curry and the so-called ‘king of fruits’, and it makes sense given that the Eastern province of Chanthaburi is famed for its fruit production, especially durian.

Chamuang leaves are a popular ingredient in Eastern Thai cooking and notable dishes that feature their tart, sour taste sensation include kaeng mu bai chamuang or pork belly curry with sour Chamuang leaves and tom bai Chamuang, which is similar to the world-famous tom yam soup.