Top 5 Must-Visit Temples In Bangkok Once In A Lifetime! 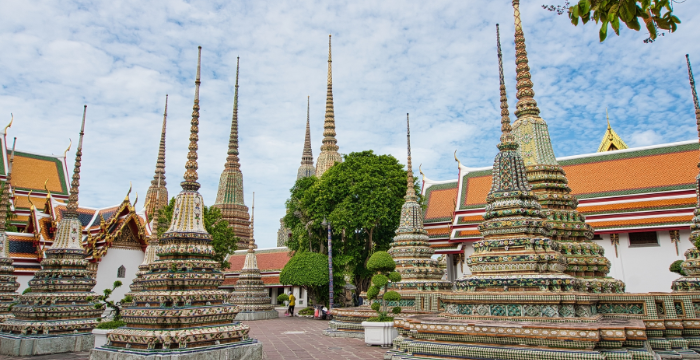 wat arun is an ancient Temple dating back to the Ayutthaya period and considered as a Royal Temple of King Rama 2 locally known as Phrabat Somdet Phra Buddha Loetla Nabhalai of Chakri dynasty. Its stupa was considered as one of the most beautiful and gigantic stupas in that era.

Can’t-miss Highlights: With its uniqueness in architecture, the wat arun’s stupas were built by white bricks and decorated by so many valuable materials such as seashells, porcelain, and many Benjarong dishes, most of which came from China. Furthermore, you can see a variety of sculptures around the Temple like Kinnarees, Giants, Angels, and Garuda. Another must-attend activity you do not want to miss is to take a photo with two temple guardians Tossakan; the King of Krung Long Ka, and Sahatsadecha; the King of Pang Tan City. Both of the demons are very powerful.

Can’t-miss highlights: The hall of the Reclining Buddha is located on the northwest of the shrine and is very famous with the unique style of decorations; the feet and the eyes are engraved with mother-of-pearl decoration. Also, you can enjoy seeing a variety of interesting ancient Thai cultural murals around the Temples.

Another highlight is a vast array of ancient Chinese dolls like Chinese ancient warriors, Lions, or even the statue of Marco Polo; he was the first foreign explorer who traveled into China and many more.

Can’t-miss highlights: One of the famous highlights of this Temple will be no other but its stairs with a spiral staircase of 344 steps. On the top of the Phu Khao Thong is where the enshrined Buddha relics with Buddha statues. Also, there are various murals around the temple which are about heaven, earth, and hell, etc. Inside the area of the Attharot Chapel is the place where Phra Attharot Srisucot Thosapol Yanabophit is enshrined within. Phra Attharot Srisucot Thosapol Yanabophit is considered as the tallest Buddha statue in Bangkok which was built around the Sukhothai era or 700 years ago.

Can’t Miss Highlights: What tourists should come to see with their own eyes in this Temple is the solid gold Sukhothai-style Buddha called the seated Phra Phuttha Maha Suwana Patimakon, known as the world’s largest golden Buddha statues, as certified by the Guinness World Records in 1991. The statue now sits on the fourth floor of Wat Traimit’s new building named Phra Maha Mondop where was built up. The second and third floor holds an exhibition educating the origin of the Gold Buddha and the History of china town in Bangkok. Before you left the temple, do not forget to visit the great Buddha image “Phra Phuttha Tossapol Yarn” too.

Can’t-miss Highlights: With the Temple’s marble ubosot imported from Italy, tourists from all over the world also know this temple as “Marble Temple.” The temple “Wat Benchamabophit” was honourably named by King Rama IV, meaning “the Monastery of the fifth King near Dusit Palace.” Another highlights tourist can’t afford to miss is murals around the ubosot, displaying the History of 8 important pagodas of Siam, as well as 11 Buddha images in various styles dating from several periods.

To pay respect, tourists must dress properly by wearing longer shorts, pants/trousers or a knee-length-or-longer skirt. Have fun.