is the third biggest province in Thailand. The area is mostly mountains and hilly terrains. Important Rivers are the Kwae Yai and the Kwae Noi which merge at the Mae Klong River.

During World War II, the Japanese had a railway built from Choom Thang Nong in Thailand to Than Be Au Sa Yai in Myanmar. The story of this railway can be experienced through many museums in Kanchanaburi.

Because of its magnificent landscape and charming beauty, Kanchanaburi has become a major tourist destination, with attractions including several well-known waterfalls, caves that were once inhabited by Neolithic men, pristine national parks, tranquil rivers, virgin forest, and several large reservoirs. Together, these attractions offer an intriguing experience for both first-time and repeat visitors. Whether it’s Fishing, Rafting, Canoeing, mountain biking, bird-watching, star-gazing, golfing, elephant and jungle Trekking, or even living in a bamboo raft, Kanchanaburi takes pride in offering them all.

In north and west Kanchanaburi, the terrain is comprised mainly of mountains and high plains, with the Thanon Thongchai Range acts as a natural border between Thailand and Myanmar. The range is the source of Kanchanaburi’s two most important rivers Maenam Khwae Noi (Little Kwae River) and Maenam Khwae Yai (Big Kwae River), which form the famous Maenam Mae Klong. As a result of these major rivers and three of Thailand’s largest reservoirs, Kanchanaburi features several of Thailand’s largest Namtok (waterfalls) as well as a number of wildlife sanctuaries.

The most defining natural attractions in Kanchanaburi is arguably the Three Pagodas Pass, a break in the Thanon Thongchai Mountain Range that divides Thailand and Myanmar. Along an overland trade route from India, it is through this pass that Buddhism was thought to first to arrive in Thailand around the 3rd century. The province and its pass were later controlled by the Khmer of Angkor in the 13th century, who built a fort there (a Khmer Temple from the time has been restored as a Tourist Attraction). The kingdom of Ayutthaya also built a military garrison in the area, though it was through the pass that the Burmese frequently swept into Siam and eventually razed the capital of Ayutthaya. In World War II, the Japanese built a railway through the pass using forced labor, including western POWs. Later known as the Death Railway, the line included an infamous bridge crossing the Kwae River that was the subject of a historically inaccurate academy award winning film. The Three Pagodas Pass area is also home to numerous hill tribes and other minority groups who reside in the area as nation-less refugees without citizenship in either land. For visitors, it is possible to get temporary one-day visas to cross the border for a sneak peek at Myanmar and do some Shopping for exotic souvenirs.

The city of Kanchanaburi is located at the point where the Khwae Noi and Khwae Yai rivers meet and form the Mae Klong River. The notorious Death Railway passed through the town, near which stands the site of the Bridge on the River Kwai. Nearby the reconstructed bridge are monuments including an Allied War Cemetery and a war museum.

In economic terms, Kanchanaburi has been prospering for a number of years. Important industries include sugar, agricultural products, and jewelry. Tourism is also a main source of income for the locals, though most are engaged in agricultural activities. The province’s population is made up of Thai, Mon, and Karen peoples, most of whom are rural dwellers who enjoy living simply and respecting nature. Moreover, folk music and dances dating back at least 500 years are still performed to this day.

Only two hours from Bangkok, Kanchanaburi is accessible by road or rail, the latter of which includes sightseeing day trips that run on weekends and public holidays. These weekend special trains are reasonably priced and make hassle free and enjoyable adventures. Even the climate of Kanchanaburi, cooled by the altitude, forest, and rivers, is a welcome respite from the heat and congestion of the nearby capital city.

Kanchanaburi city, the capital of Kanchanaburi Province, is a popular resort town. Picturesque and worthy of a visit in its own right, it is frequently visited as base of operations for exploring the many cultural, natural, and historical attractions in the surrounding countryside. Located at the confluence of the Kwae Noi and Kwae Yai rivers, Kanchanaburi lies at the source of the Mae Klong River, and these majestic bodies of water are defining characteristics of the town.

The original town of Kanchanaburi was established by King Rama I as a first line of defense against the Burmese, whom he believed might use the old invasion route through the Three Pagodas Pass at the Siam-Myanmar border. According to most historians, the old town of Kanchanaburi was located near Ban Lat Ya, a small Village situated approximately 16 kilometers north of the present town. The present provincial capital is a relatively newer town built by King Rama III in 1833.

The town itself is a place to relax, watching the water from the banks of the river, inside a raft house, or from a riverside Restaurant. Many visitors like to rest along the river with a cold drink and a good book. Many of them come here just for a couple days but stay for weeks in order to explore all of the attractions in the surrounding countryside. Along with visiting spectacular waterfalls, lush forest, and three of Thailand’s largest reservoirs, white water rafting, elephant trekking, and golfing are popular activities for visitors. Kanchanaburi is an excellent tourist destination for nature lovers.

BEAT THE SUMMER HEAT IN KANCHANABURI

Staying with a refreshing stream is an excellent way to beat the summer heat. Kanchanaburi province offers a smart choice with its plenty of floating hotels that can keep you fresh throughout the hot season. Situated amidst embrace of mountains, many raft hotels can become your cool summer escape. 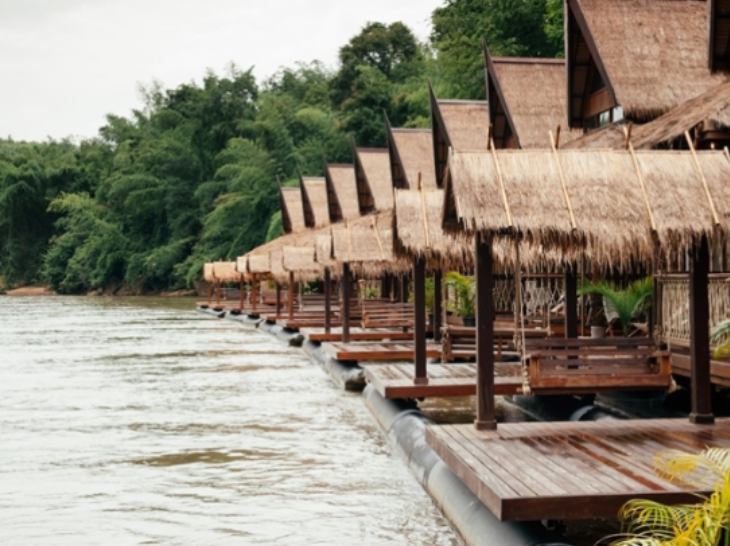 ake a stroll through the historic Village of Pak Prak, and be amazed by Kanchanaburi’s long History.