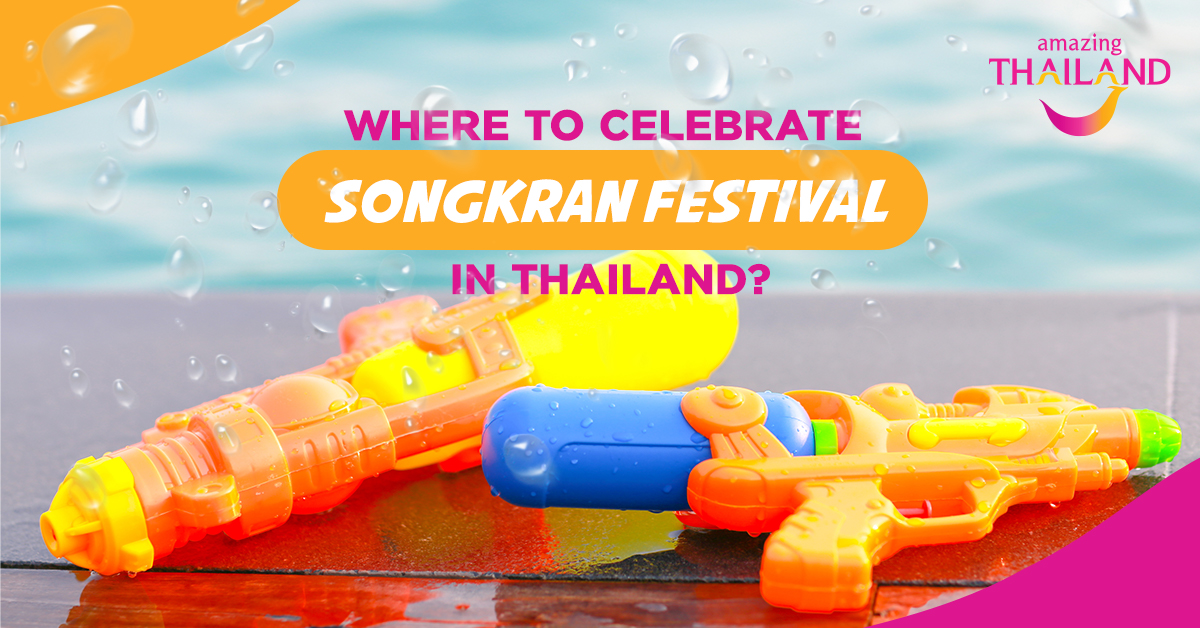 Want to participate in the world’s biggest friendly water fight? Look no further! We have prepared an ultimate guide on where you can celebrate Songkran Festival or Thai New Year, taking place annually from 13-15 April.

Although Songkran is widely celebrated in Bangkok, it is more lively in certain neighborhoods than others. The two most famous areas are Silom and Khao San Road.

During the festival, Silom, a busy financial district and nightlife spot, will transform into one of the biggest water-fighting battlefields. The entire Silom Road is even closed to thru traffic. It is instead occupied with large crowds, each carrying water guns.

Nearby are shops selling water dispensers and other supplies such as waterproof cell phone pouches and white clay filler.

Since the celebration is busiest in the evening, we suggest you come down a little earlier as it could be difficult entering the area after 7 PM. To get here, take the MRT to Silom station or the BTS to Sala Daeng station. They will both drop you off right in front of the water fighting area.

It is also no wonder that another water-fighting hotspot is at Khao San Road, given huge crowds of people, live music, and affordable food and drinks. There are stages set up along the street where DJs will play a variety of tracks. People are usually gathered around these stages.

The street is most crowded during the afternoon and evening. As Khao Sarn Road and nearby streets are closed to thru traffic, you will need to drop off blocks away, followed by a walk to get here. You are also not allowed to bring in any cans and glass bottles. However, there are plenty of bars and shops selling drinks and street food for you to refuel your energy.

Songkran Festival in The Old City is known to be the wettest celebration. Apart from the usual water guns, buckets of various sizes are also used. You will surely get wet once stepping in the water battlefield!

The most vibrant and biggest celebration happens at the Tha Phae Gate, located on the eastern side of the town. Stages are set up along the street where music is played, and special performances such as the Miss Songkran beauty contest are hosted.

At the same time, you can visit Chiang Mai’s Walking Street market, which runs from the Tha Phae gate to almost the other side of the old city. It opens every evening during the holiday.

On the first day of celebration, you can also catch a long parade featuring Buddha statues, traditional music, dance, and costumes. The procession starts from Wat Phra Singh and travels along with the Tha Phae gate and Rachadamnoen Road before returning to the temple.

Looking for a unique way to celebrate Thai New Year? Visit Phuket during April and experience Songkran on the beach at Patong! It is one of the most famous spots in Phuket.

Due to a wide variety of activities, Patong beach attracts a big crowd of both locals and foreigners annually. Besides water splashing, here, you can participate in sandcastle making on the beach and enjoy the beauty contest, Thai dances, live bands, and EDM shows.

If you think that three days are not too short for water fights, Pattaya is where you should consider visiting during Songkran Festival. Although the celebration officially lasts for 3 days in other places, at Pattaya, it usually extends to a whole week!

The extra holiday is known as “Wan Lai,” which translates to flowing day. Every year on 19 April or Wan Lai Day, people are fully armed with water dispensers such as water guns, buckets, or even hoses to really get the water flow.

On this last day, you will also see several parades with statues of Buddha being carried around the town where Thais pour scented water over the Buddha statues. This long-existing tradition is believed to help wash away bad luck and misfortunes and start the year right.

Another top spot to celebrate Songkran Festival is Hat Yai, located in the Southern region of Thailand.

It is most famous for the Hat Yai Midnight Songkran, where you can join the water-fighting war at night in the city’s downtown. At this special event, you can expect loads of late-night fun activities such as foam parties and concerts. Undoubtedly, it has gained great interest from both locals and tourists every year.

If you are planning to celebrate Songkran Festival in Hat Yai, we suggest you book the hotel early as rooms are fully booked very quickly.

Don’t want to miss out on the fun? Get ready your water guns and head to one of the top 5 spots mentioned above and celebrate the Songkran Festival like a local!

Remark: Songkran Festival 2021 is cancelled due to the Covid-19 situation.