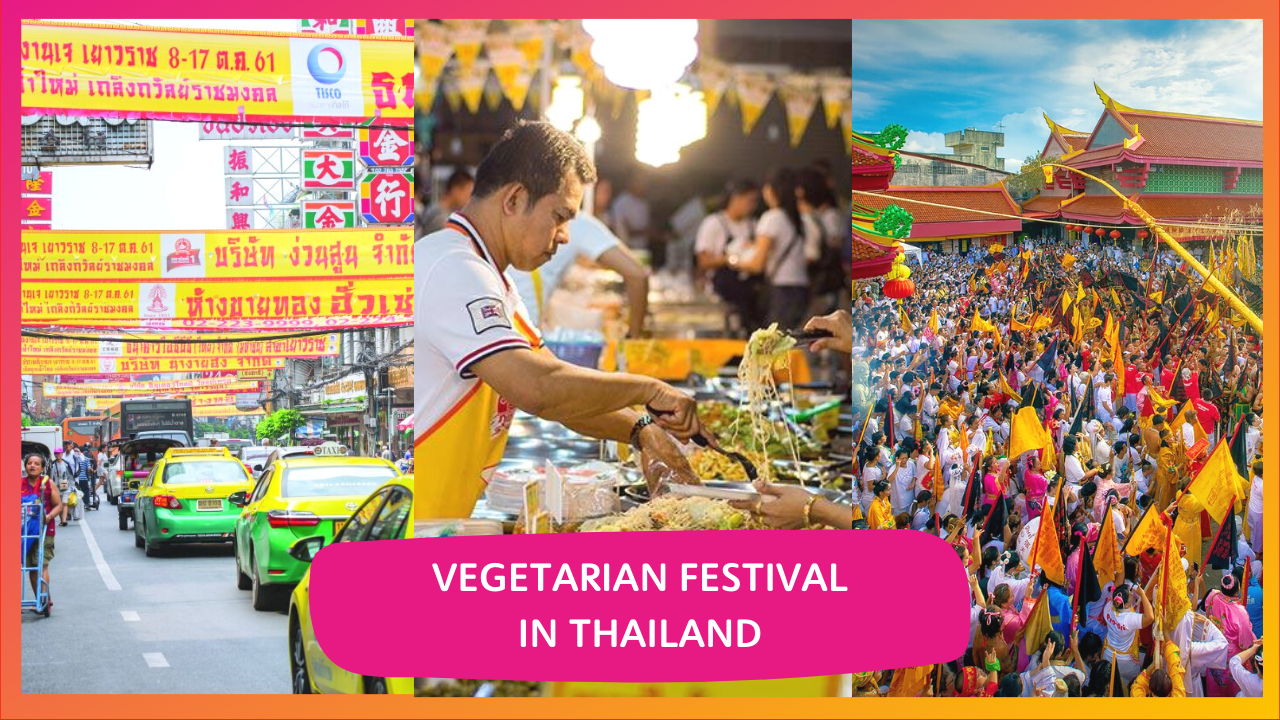 Vegetarian Festival, also known as The Nine Emperor Gods Festival, is a Taoist celebration that sees Thailand turn vegan for nine days. The local Chinese community believe that abstinence from meat and other negative stimulants will lead to good health and peace of mind.

Vendors and restaurants all over Thailand switch to selling vegan food and they use yellow flags with red Thai or Chinese characters to signal their participation. The unbelievable variety of vegan dishes to choose from during the festival is a feast for all senses that should not be missed.

Vegetarian Festival usually falls in late September or October and the best place to celebrate in Bangkok is Chinatown (Yaowarat), where you’ll see rows of stalls selling all kinds of vegan dishes.

These food vendors line the streets of Yaowarat, transforming it into a bustling event space. Apart from food, there are also nightly Chinese opera performances and special activities at famous temples such as Leng Buay Ea Shrine and Wat Mangkon Kamalawat.

Vegetarian Festival is most celebrated in Phuket and tourists from all over the world travel to Phuket during September / October just to join the event. It is not for the faint-hearted though because the celebration includes acts by devotees to invoke the Gods, such as body piercing and fire walking – all without any anaesthetics.

It is believed that many years ago, a famous Chinese opera crew travelled to Phuket to perform for the Chinese inhabitants of the island. Shortly after arriving, the entire crew fell extremely ill. When traditional medicine did not help, they went on a strict vegan diet as well as pray to the Nine Emperor Gods in order to cleanse their bodies and minds. In a short time, the entire Chinese opera crew recovered from their illness, and the annual Phuket Vegetarian Festival was born.

The event that kicks off the annual Phuket Vegetarian Festival is the raising of a bamboo pole in every Chinese temple across the island. The pole is meant to invite the Nine Emperor Gods down to earth. The ceremony is relatively calm and peaceful. Towards the end of the Vegetarian Festival, devotees are seen in brightly-coloured traditional Chinese costumes, parading around with body piercings. On the last day, fireworks are set off and thrown at devotees as they parade through the streets.

More than 40 Chinese shrines around Phuket participate in the festival. If you want to be part of the most impressive events, head down to these major shrines:

We hope you will make it a point to experience the Vegetarian Festival in Thailand next year once travel restrictions are lifted. For more recommendations on what to do around Thailand, visit https://tourismthailand.sg/ or follow us on Facebook and Instagram!